Where Is That Park?

I’m grateful to my son Tom for showing me the location of Gezi Park, whose impending destruction has touched off the demonstrations in Turkey.  We had both spent time as tourists in Taksim Square, where the demonstrations are centered, and couldn’t recall a wooded park, but Tom had the wit to look it up on Google Earth.  As he showed me, the reason we hadn’t seen the park is that it’s tucked away to the north of the main bus queuing area.  “It’s their own place,” he commented; “the tourists don’t go there.”  He also pointed out that there’s very little sign of green space elsewhere in the Beyoğlu district. 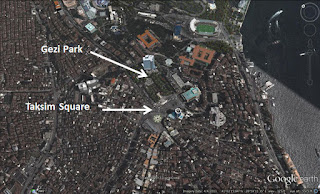 Image courtesy Google Earth
There’s what seems to be a good and quite recently updated piece on the park on Wikipedia – see http://en.wikipedia.org/wiki/Taksim_Gezi_Park -- and also a discussion of the project designed to destroy it -- http://en.wikipedia.org/wiki/Taksim_Military_Barracks.  The proposal, we’re told, is to use the site to build a replica of the long-ago (1940) demolished Taksim Military Barracks, which will be used as a shopping mall.
Wikipedia tells us that the project was approved in 2011 by the Beyoğlu Municipality’s assembly, so perhaps it’s not entirely an example of heavy-handed government running over local interests.  On the other hand, the article goes on to say that “although the area falls within the purview of green space protection ordinances, development interests are exploiting statutes protecting historic structures in order to trump those protections.”  It also notes that “as of the time of the decision, no surviving portion of the barracks exist on site.”
So if Wikipedia is to be believed, at the base of the protests in Turkey we see historic preservation laws being twisted to justify building a more or less hypothetical model of an Ottoman-era barracks for use by commercial interests, replacing a park that’s been used for the last 70 years or so by local people as one of their few available bits of green space.  If this is true, Istanbul’s historic preservation authorities ought to seek new employment.
Posted by Thomas F King at 5:27 AM