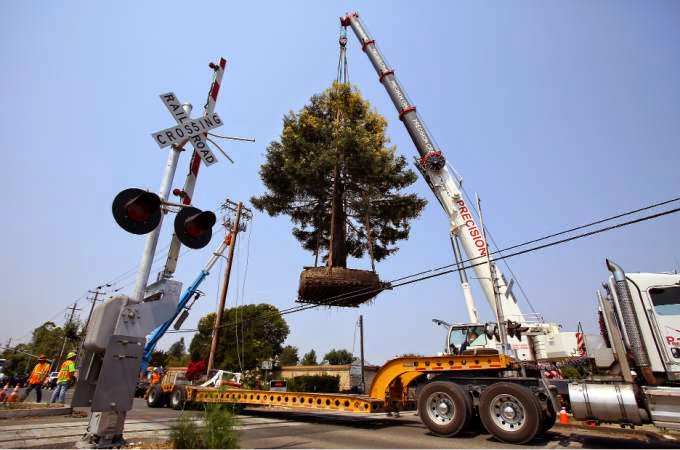 In connection with updating National Register Bulletin 38 on traditional cultural places (TCPs), with which I’m helping the National Park Service (NPS), a couple of people have asked for examples of places that, while they may be eligible for the National Register of Historic Places (NRHP), are not TCPs.  Or that aren’t eligible for the NRHP regardless of their traditional cultural character.  Those of us working on the update have agreed that providing such examples would not be a good idea – that doing so would only provoke arguments and tempt misuse.

But as work on the update has progressed, I’ve become aware of a place – a source of community pride and controversy and the focus of what seems to be a mutually satisfactory piece of conflict resolution – that seems to me an irresistible example of a significant place that’s neither a TCP nor eligible for the NRHP.

The “place” is a tree – a rare Chimeric Albino Redwood – hermaphroditic, with foliage shading from green to white – that’s grown quietly for many years in Cotati, California[1].  The tree was scheduled for removal to make way for track work in connection with construction of the “SMART[2] Train” – a light rail commuter service along the U.S. 101 corridor through Sonoma and Marin Counties.  The community rallied to its defense, and in the end it was saved by the SMART proponents, who carefully moved it to a safe location down the tracks.

My sister, Cotati historian Prue Draper, has been one of those spearheading preservation of the tree, and I hasten to say that I’m very glad for her success and applaud the SMART folks for their action.  But as Prue was working to rally support on the tree’s behalf, and despite the fact that I’m sure there must be federal money behind the SMART Train, thereby making it subject to review under Section 106 of the National Historic Preservation Act (NHPA), I refrained from suggesting that she allege the tree’s eligibility for the NRHP.  Because I just don’t think it’s eligible, and to raise the question – especially if the official answer came back as “no” – might complicate Prue’s efforts.

But why don’t I think the tree is eligible?  It’s old enough – it was planted some eighty years ago – and it arguably falls within the NRHP’s definition of an “object,” that is, “a material thing of functional, aesthetic, cultural, historical or scientific value that may be, by nature or design, movable yet related to a specific setting or environment” (36 CFR § 60.3(j)).  Its preservation clearly enjoyed and enjoys community support, and the SMART Train has invested a good deal of effort, money, and engineering/arboreal know-how in preserving it.

2.       Nor is it associated with any individual who figures prominently in the history of Cotati, Sonoma County, or California (per NRHP criterion “b” – 36 CFR § 60.4(b)).  The gentleman who planted it was apparently a perfectly honorable and contributory member of the community, but nobody has suggested that he had a pivotal role in local, state, or other history.  Now it’s become associated with Prue, and she’s certainly played such roles, but it would be a bit much even for her devoted baby brother to suggest that her recent effort to preserve the tree, in and of itself, made the redwood eligible for the NRHP.

3.       Per NRHP criterion “c” – does the tree “embody the distinctive characteristics of a type, period, or method of construction,” or “represent the work of a master, or “possess high artistic values?”  Well, only God can make a tree, so I suppose the “work of a master” subcriterion might apply, but I suspect that the Keeper of the NRHP would balk at an argument that could really apply to any tree or other work of creation – and there might be some church/state issues, too.  Criterion “c” also allows places to be eligible that “represent a significant and distinguishable entity whose components may lack individual distinction,” but I’m not sure that the distinguishable entity “redwood trees of Sonoma County” would be much easier to justify as historically significant than the Cotati redwood alone.

4.       What about the last of the NRHP criteria – Criterion “d”?  Has the tree yielded, or may it be likely to yield, “information important in prehistory or history?”  I don’t think so.  Its albino, chimeric, hermaphroditic character makes it quite a rare tree – maybe even unique – and it’s of interest to botanists and arborists, but standard NHPA practice suggests to me that Criterion “d,” even though it doesn’t say so, really justifies ascribing significance only to places that can produce information important in human history and prehistory.  While human history in Sonoma County has certainly featured a good deal of interaction with redwoods, I don’t know what information this redwood might supply about that interaction.  Rather little, I suspect.

But going back to Criterion “a,” could I not argue that the tree is a traditional cultural place (TCP)?  Does not the very demonstration of community support for the tree that Prue and others organized mean that it’s associated with significant historical events or patterns of events?  Was not its very preservation a significant event in Cotati’s history?

Well, maybe, and perhaps in fifty years or so people will look back and recognize it as such, but for now, I just don’t see it.  It would be otherwise if people in Cotati had worshipped the tree, or gotten married in its shade, or held picnics around it, or held climbing races up it, or written poems about its variegated foliage; then, I think, the TCP case might well be made.  But as far as I can tell, everyone just walked and drove past it and at most wondered what was wrong with that funny-looking redwood, until Tom Stapleton, a professional arborist, learned that it was in danger and alerted Prue and others to the fact.  The rest is history, but too recent history, I think, to make the tree eligible for the NRHP.

Thanks to the community’s mobilization and SMART’s consistency with its acronym, Cotati’s albino redwood is now safe, apparently thriving, and may well enjoy a long life as a place that becomes traditional in the city’s cultural life – and hence eligible for the NRHP.  For now, though, I think it’s a good example of a place that’s significant but neither traditional nor eligible.

[1] See http://news.nationalgeographic.com/news/2014/03/140319-redwood-albino-chimera-california-tree-tallest/ for details.
[2] For “Sonoma-Marin Area Rapid Transit”
Posted by Thomas F King at 3:18 AM