The Hole in the Head: Lessons Learned and Lost

Posted yesterday (11/21/14 in the Huffington Post:  http://www.huffingtonpost.com/tom-king/the-hole-in-the-head-less_b_6198918.html )
On November 1st, I accompanied my sister, Prue Draper, to a dinner at the Sonoma County Museum in Santa Rosa, California, marking the opening of an exhibit on the Hole in the Head.
The what?
The Hole in the Head, now fifty years in place - from which emerged (with apologies to Rachel Carson, who also has a dog in the fight) the modern environmental movement, including the National Environmental Policy Act (NEPA).
The Head in question is Bodega Head , the headland forming the west side of Bodega Bay, probably most widely known as the scene of Alfred Hitchcock's "The Birds" (1963). A scenic out-jutting into the Pacific, where I camped and pothunted and fished salmon as a youth, off which we scattered my mother's ashes; a place I visit whenever I'm in the area, usually with Prue to get crabs sandwiches at the Spud Point crab shop.
And the Hole is where Pacific Gas and Electric Company (PG&E) tried, back in the late '50s and early '60s, to build a nuclear power plant - the "Bodega Bay Atomic Park." Assuring the Sonoma County Board of Supervisors and the Atomic Energy Commission that the San Andreas Fault (of 1906 San Francisco earthquake fame), which passes through and formed Bodega Bay, posed no risks at all to the plant, the local community, or the bay.
In those days there were no environmental laws to speak of, and the Board of Supervisors decided they didn't even need a public hearing; this was clean, limitless energy, after all, and economic development, and jobs! Full speed ahead said they - as did the minimally involved U.S. government.
The exhibit - you can read about it and the Museum at http://www.sonomacountymuseum.org/ -- is a triumph, especially for its prime creator, Curator Eric Stanley. And a triumph for what it commemorates - the successful fight, against all odds, by local citizens and the allies they recruited, to stop the project and save Bodega Head for posterity (It's now mostly part of the County parks system). The exhibit particularly honors Bill and Lucy Kortum, the pioneering northern California environmentalists, who spearheaded the fight and were at the dinner to receive our applause.
The next day, Prue, her son Bob and I drove out to the Head, got crab sandwiches and ate them overlooking the bay with our backs to the Hole - the foundation excavation for the reactor, abandoned when the opponents at last were able to enlist then-Secretary of the Interior Stuart Udall to have the U.S. Geological Survey do a study, which proved that - yes, folks, there really WAS an active earthquake fault running right through the Hole. Nowadays the Hole is full of water, a quiet stopping place for migratory waterfowl.
But about the Hole's place in history.
PG&E gave up the project in 1964. NEPA was enacted late in 1969, and most people credit Rachel Carson's 1962 Silent Spring with lighting off the movement from which NEPA was born. I mean no discredit to Carson or her book when I suggest that the Hole in the Head fight struck another match. Silent Spring, after all, was mostly about the disastrous environmental impacts of indiscriminate pesticide applications; it may be more safely credited with leading to the 1972 Clean Water Act (CWA) than to NEPA. CWA is a science-based law, authorizing the establishment of clear-cut pollution thresholds and forbidding polluters to cross them. NEPA is about process - requiring government agencies to look before they leap, and that, at base, is what the Kortums and their colleagues were fighting for around the Hole.

PG&E had all the experts in hand, ready and willing to testify that the Atomic Park would be utterly benign, that no earthquake would trouble its operations, even that the power lines to be strung across Bodega Bay would be aesthetically pleasing. The company and its pliant public servants pooh-poohed the concerns of the local citizens - they, after all, were not experts.
Hence the logo for the Museum's exhibit, emblazoned on lapel buttons like the one shown below: Question the Experts 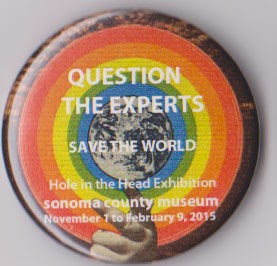 Which is what NEPA - in theory - provides for; the experts are to analyze a project's potential effects on the environment; everybody else gets to question them, and they have to answer.
But as I sat on the edge of the Hole the day after the dinner, watching families playing on the beach and crab fishermen plying their traps, it seemed to me that - for whatever reason - the lessons of Silent Spring have been learned and remembered - or at least translated more effectively into dogma - better than those of the Hole in the Head. Not that the world is free of the pollution that Carson decried - far from it - but at least there is widespread acceptance of the fact that pollution ought to be reduced, and that government can require its reduction. And the people who run the show under the CWA and other pollution control laws are the experts - scientists and environmental engineers, prescribing hard and fast standards and (we hope, at least) compelling adherence to them.

Under NEPA too, the focus of attention has come to be on the preparation of environmental assessments and impact statements by experts - usually by experts employed by project proponents, just like those hired by PG&E back in the '50s. Assessments and statements that are close to incomprehensible by ordinary educated citizens, whose comments on them are routinely dismissed by the project proponents' paid-for experts and their colleagues in the government review agencies.
What's been lost, I'm afraid - or really never quite realized in the construction of environmental impact assessment (EIA) systems under NEPA and similar laws - is the pivotal role of the public.
Almost fifteen years ago, in Citizens, Experts, and the Environment: the Politics of Local Knowledge (Duke U. Press), Frank Fischer provided a detailed analysis of how "expert" analysis of environmental impacts tends to be biased against the concerns of citizens. He looked hopefully toward reforms based on environmental justice and expanded/improved citizen participation.

Somehow though - maybe reflecting other things that happened around the turn of the century, like the election of George W. Bush as president, the general ascent of conservatives in the U.S. government, and the shocks of 2001, such reforms seem to have stalled, and today we have EIA systems that everyone seems to understand - and, oddly, accept - as reliant on "expert" analysis bought and paid for by development proponents. We have a multi-million - probably multi-billion - dollar EIA consulting industry to perform such analysis, employing practices that systematically exclude and denigrate the views, expertise, and concerns of citizens. We have government decision makers and media mavens who can and do blithely accept the notion that industry-prepared impact analyses - like the much-touted studies of the proposed XL Pipeline's supposedly minor impacts - are reliable bases for decision making. And we have a public that - though widely dissatisfied with the matter - doesn't know what to do about it.
We have, I reflected, returned to the 1950s; we've just complicated the processes by which the experts and their employers work their will. Enriching a lot of EIA analysts in the process, and by doing so, buying them - us, because I have to acknowledge that I'm part of the system - out.
Maybe, I thought, it's time for the environmental movement, and the government, to revisit the Hole in the Head, and think about the lessons it teaches us. A way to make that happen, I thought, might be to bring Eric Stanley's excellent exhibition to Washington, and make sure that members of Congress see it, maybe ponder it (I know, I do have a naïve streak).
So when I got back to DC, I asked a friend who's reasonably highly placed on the Senate staff what might be possible.
"I don't think so," he replied. "It's too obscure." 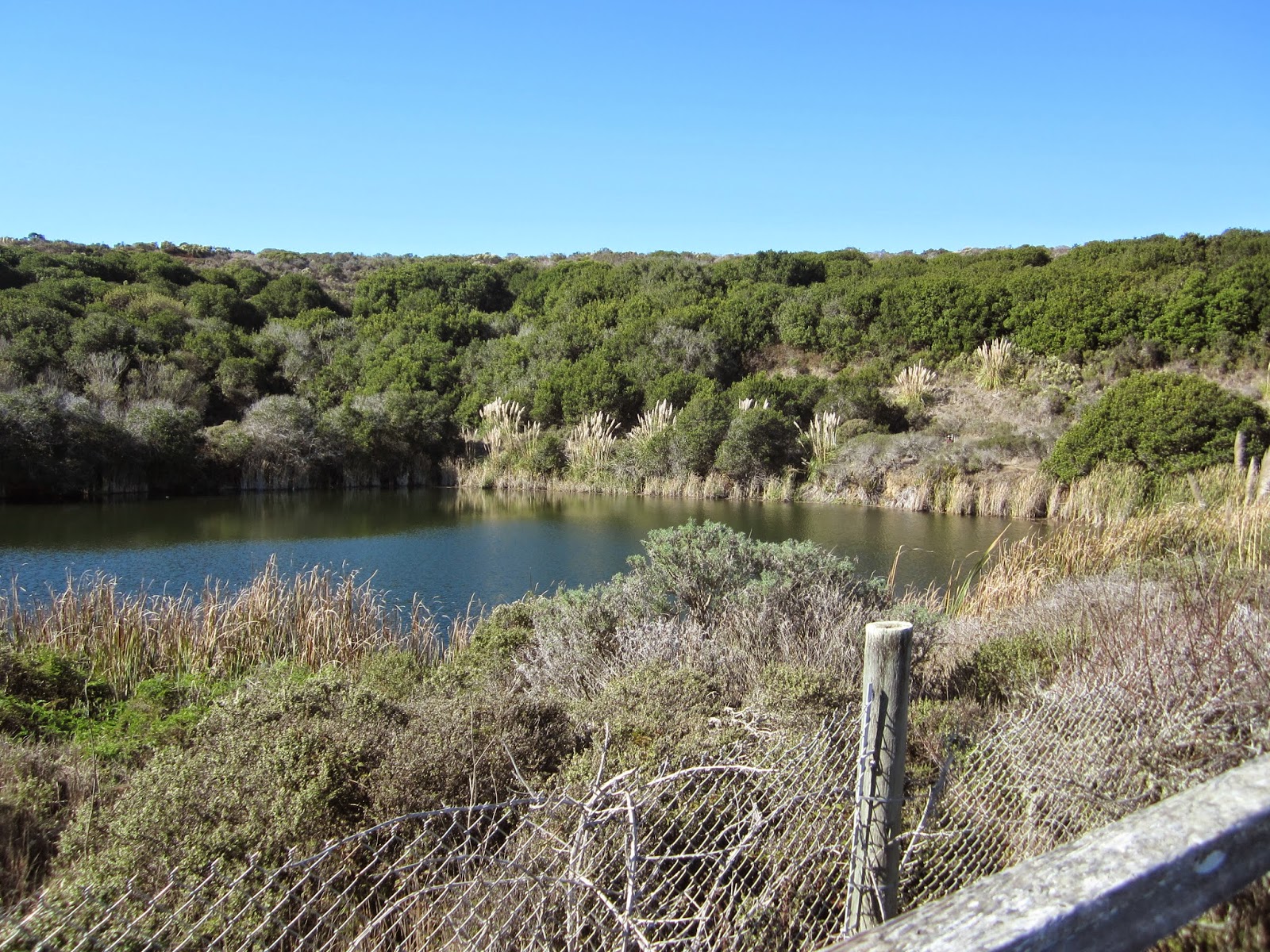 What is meant by "NEPA and similar laws" ? I'll assume you are referring to other procedural laws that have no teeth - no fines, no penalties, no police powers, no subpoena powers. These laws only provide citizens the recourse to go to court. If nobody uses that recourse - tough. If somebody uses that recourse, goes to court, and loses - tough again.

So don't blame the reality of weak procedural laws on the ascent of conservatism, or autocratic agencies for not listening to the public. Conservatives (still hugely outnumbered) inherited these laws that were passed by Great Society Congresses, and agency bosses have known since their passage which laws have teeth, and which ones don't, which laws they really needed to pay attention to, and which laws they could brush off with token public hearings and consultation and the like. Blame the Congresses that passed these weak, procedural laws in the first place - that was the original public deception. In the best of all possible worlds, laws like NEPA would guarantee environmentally desirable results. But they don't, because Congress never intended that they must, or even would, most of the time.

Thanks, Anon. I don't entirely disagree with you, but I think it's simplistic to think that we'd do better if laws like NEPA had more teeth. I see the toothy laws like the CWA get circumvented pretty regularly, but besides that, some things just aren't amenable to hard-and-fast, no more than x ppm, standard setting. Like them or not, "procedural" laws are often necessary and, I think, desirable.

I don't think that the Great Society congresses never intended for their laws to protect the environment, but I do think that they, and we, were mighty, mighty naive. And I think we all put a lot too much reliance in the regulatory state and the courts. But fixing blame may not be particularly helpful, and it's not what I'm interested in; I'd prefer to explore what can be done to make things better.